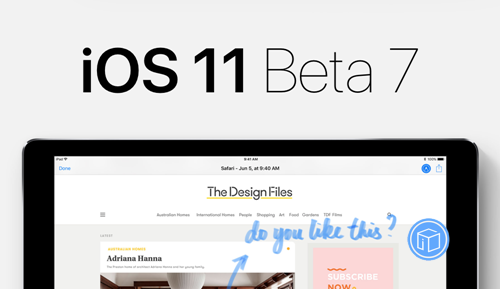 iOS 11 beta 7 introduces a new Apple Music icon in the Control Center when no music is playing. It used to be a placeholder iPhone image, according to MacRumors.

Apple’s release notes say there’s a new known issue that could cause users upgrading from iOS 11 beta 5 to beta 6 or later to see their updates stall indefinitely. The fix is to delete the update from Settings > General > iPhone storage and then re-install.

iOS 11 brings quite a few design changes, including a customizable Control Center and a new Lock screen that’s been merged with the Notification Center. Peer-to-peer Apple Pay payments are coming in the Messages app, which is also gaining a new App Drawer, and there’s a Do Not Disturb While Driving feature that’s meant to help drivers stay focused on the road. Siri, Photos, the Camera app, and more are also gaining new features and refinements.

ARKit for developers will bring a range of new augmented reality apps and games to iOS devices, and a new Core ML SDK will let developers build smarter apps. iOS 11 is also the biggest update ever for the iPad, with a new Dock that introduces much improved multitasking, a Files app for better managing files, improved Apple Pencil support, a revamped App Switcher, and a system-wide drag and drop feature.

So are you looking forward to it?