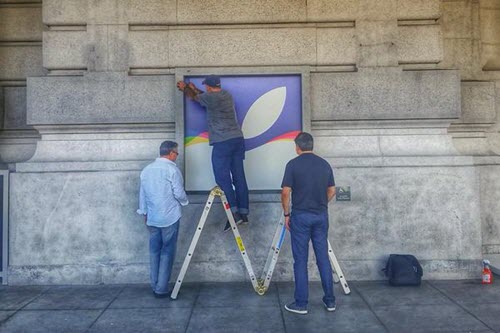 Not long ago, it was rumored that the Sept 9 event would be held at Bill Graham Civic Auditorium in San Francisco and now, Apple is decorating Bill Graham Civic Auditorium just ahead the Sept 9 events. As shared by several Twitter and Instagram users, signs with the Apple logo are beginning to go up, and several Apple-branded flags are flying, according to MacRumors.

A white Apple logo with rainbow-colored accents against a blue background is shown on one wall of the auditorium. The same design was seen on the invitations for the event and was created to mimic Siri’s look on the Apple Watch and iOS 9.

Apple’s upcoming Wednesday, September 9 event is expected to be huge. The auditorium where it’s being held seats 7,000, and the company may be using some of the available space to demo products that will be released. The event will see the debut of an unprecedented number of devices, including the iPhone 6s and 6s Plus, the new Apple TV, the iPad mini 4, and the iPad Pro.

Apple is also expected to introduce additional Apple Watch Sport bands, perhaps in gold, and new Sport bands. An iPad keyboard may also make an appearance at the event, and we’ll also get release details for iOS 9 and Watch OS 2.

So do you expect for the approaching huge event?