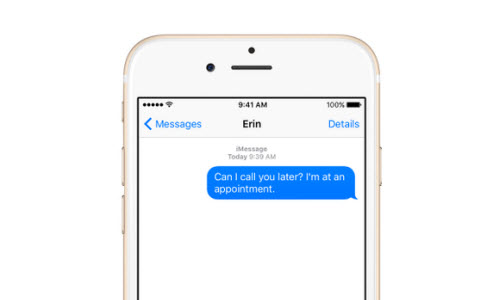 Apple is planning to ruin one of the most hilarious aspects of using an iPhone: iMessage autocorrect, which routinely changes the most basic of texts into something offensive, sexual, or just completely off-base. The company just filed a patent application for a new iMessage feature that would tell a recipient when autocorrect has been at work.

The patent filing, first spotted byAppleInsider, covers an iMessage feature that would highlight an autocorrected word. The person who’s reading your message won’t be able to see what you intended to type, but at least they’ll know that it was your iPhone and not you who made that bizarre wording choice.

There’s even an option for the person you’re messaging to request a clarification. In the scenario to the right, an image from Apple’s filing, choosing that option would automatically send a message that says, “You sent ‘being.’ What did you mean?”

It’s unclear if or when Apple will bring this feature to iOS, but as long as it doesn’t kill the cottage industry of sites devoted to documenting autocorrect’s biggest fails, then we’re fine with it.

How To Reclaim Deleted iMessages History from iPhone SE?

How To Print Text Messaes from iCloud Backup?