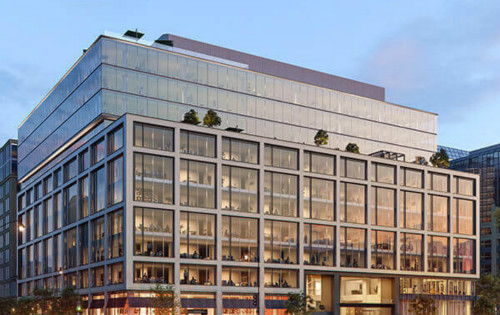 Citing a source involved in the deal, Bisnow reports Apple will lease a full floor in 700 K St. NW, currently under development as a high-end office building.

Part of The Meridian Group’s Anthem Row project, 700 K St. is one of four properties in a complex previously known as Techworld. Meridian purchased the site in 2014 and began a $142 million redevelopment in 2016 with plans to split the building into two addresses, 700 K and 800 K. Microsoft’s Innovation and Policy Center is located two blocks away.

The Anthem Row facility overlooks Carnegie Library, which will later this year house a 63,000-square-foot global flagship Apple store. Apple signed a ten-year lease for the historic building in 2016 and was granted permission to renovate the structure last year.

Apple revealed plans for Carnegie Library last May, saying the location will be refitted to retail chief Angela Ahrendts’ specifications. Along with the usual sales floor and Genius Grove amenities, Apple intends to use the space to host free concerts, art exhibits and educational workshops.

While Apple’s intentions for 700 K are unknown, the lease reportedly covers about 23,000 square feet, a relatively small area for the tech giant. Apple typically seeks larger offerings, into the hundreds of thousands of square feet, making the D.C. deal an outlier.

The company in 2012 leased a 215,000-square-foot, four-building complex in Cupertino before building its AC3 campus a stone’s throw away. Apple expanded its presence in the area with the lease of a 260,000-square-foot property near Apple Park in 2015. That same year, the company’s footprint swelled in San Jose with leases for a 300,000-square-foot multi-use space and a 202,000-square-foot office building.

Also in 2015, Apple inked a deal for its first major office space in San Francisco, a 76,000-square-foot facility in the city’s SoMa neighborhood estimated to accommodate 400 to 500 workers.

Expansions in California continue, with a pair of Santa Clara office locations leased in 2017 and earlier this year.

More recently, the iPhone maker reportedly leased more than 185,000 square feet of space in the heart of Los Angeles’ film scene, as well as an 85,000-square-foot production facility, as part of efforts to build out an original video content business.