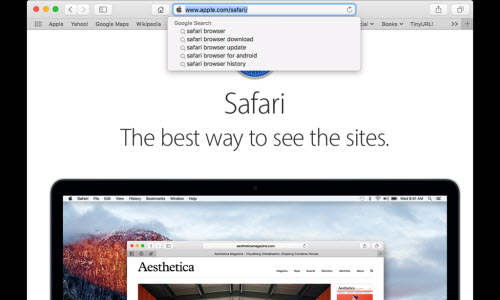 So maybe you heard from friends that Apple announced earnings yesterday – another record quarter, but with trouble on the horizon. iPhone sales weren’t as good as hoped, and revenue is expected to decline in the current quarter. You’d like to know more, so you fire up Apple’s Safari Web browser on your Mac or iOS device and start searching and . . .

You’re not alone. iOS and OS X users this morning worldwide have been reporting that Safari’s crashing when trying to do a search and Apple’s Safari Suggestions feature kicks in, according to The Next Web. Not everyone is experiencing it – it’s not happening on my Mac mini nor on my iPhone 6 – which may or may not have to do with whether Suggestions data is cached on your device’s drive.

And although users on Reddit initially attributed it to the recent iOS 9.2.1 update, it appears to be affecting Safari on other versions of iOS as well.

There is a fix, though – turn off Safari Suggestions.

In iOS, go to Settings > Safari and turn off Safari Suggestions.

In OS X, launch Safari and in the Menu Bar go to Safari > Preferences > Search and uncheck the “Include Safari Suggestions” box.

Or, you could install a different browser, such as Google Chrome or Mozilla’s Firefox.

This bug is a big deal, so it’s likely Apple will fix it soon. I’ll update this post once the issue’s resolved.

Oh, and this is not the same thing as the annoying link people have been passing around that sends users to a site that crashes Safari.

How To Retrieve iPhone Text Messages Lost After a Reboot?