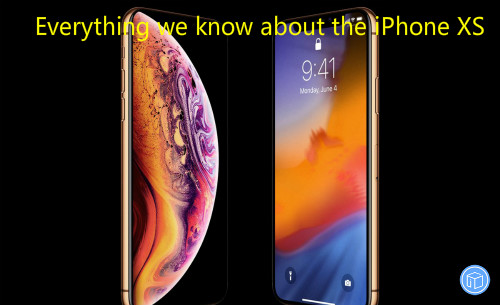 Apple officially announced its September iPhone event this week, confirming that it will be held on September 12th at Steve Jobs Theater. The event is expected to be packed full of new product announcements, headlined by the iPhone XS. Read on for a roundup of everything we know about the iPhone XS…

Only this week were finally able to confirm the 2018 iPhone naming. After much speculation and back and forth, we reported that the iPhone will be referred to as the iPhone XS – pronounced iPhone Ten S.

Further, a Bloomberg report suggested that Apple is contemplating dropping the ‘Plus’ tag from this year’s iPhone XS. This would mean that Apple is taking an iPad-like approach to naming with the iPhone XS, having two screen sizes under a single brand name.

In terms of screen size, the iPhone XS will be available in two options: 5.8-inch and 6.5-inch, both of which will use OLED displays.

We aren’t expecting any form factor changes for the iPhone X, which currently measures 143.6 mm by 70.9 mm by 7.7 mm thick. In terms of display technology, we should expect the same 2435 x 1125 resolution with 458 pixels-per-inch.

Supply chain schematics suggest that the 6.5-inch iPhone XS will measure in at 157.53mm by 77.44 mm by 7.85 mm thick. This is smaller than the iPhone 8 Plus, which features a 5.5-inch display but with much larger bezels.

For the 6.5-inch iPhone XS display, a Bloomberg report has indicated the device may feature a 1242 x 2688 resolution, which would make a for pixels-per-inch at the 458PPI mark.

Both screen size variants of the iPhone XS are expected to feature Apple’s A12 processor, which serves as the successor to the current A11 Bionic.

The A12 processor is the first Apple processor to be built on the 7-nanometer design, allowing for speed improvements in a smaller and more efficient package – hopefully leading to some battery improvements, as well.

Performance is expected to be a major focus for this year’s iPhone XS – which is often the case for ‘S’ year iPhone upgrades. A report this week indicated that Apple has focused heavily on making improvements to iPhone performance this year, and alleged leaked benchmarks suggest a bump to 4GB of RAM (compared to the iPhone X’s 3GB).

Pricing is hard to predict ahead of Apple’s announcement – and could change at the last-minute – but this seems to be the most likely outcome.