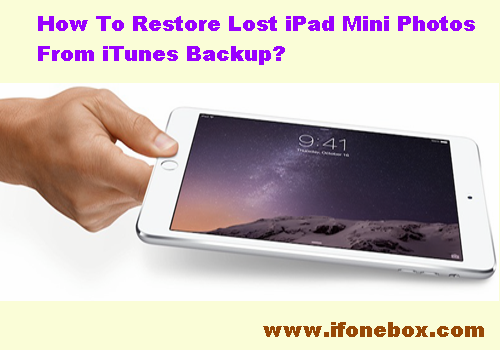 Have you been bothered by the iPad Mini problem as this user? This user was puzzled that his iTunes shows 660 photos but only 143 are transferred to his iPad Mini. As to such a problem, I think the lost photos are those photos which were deleted on your iPad, hence, when you restore the photos from iTunes to your iPad, the places which belong to those  deleted ones are covered by other data. But don’t worry, you can use iFonebox to extract and restore those photos from your iTunes to iPad Mini.

As you may have known that iFonebox is a powerful iOS data recovery which is capable of recovering deleted data like contacts, notes, messages and more from your iPhone/ iPad/ iPod Touch directly. In addition, you can extract and restore backed up data from your iTunes or iCloud with it. What’s more, you can also recover the lost contacts and notes to your iOS devices directly. Pretty functional and professional.

How to restore lost iPad Mini photos from iTunes backup?

The first thing you have to do is to download and install iFonebox. Two versions are optional: Windows version and Mac version. Plus, there are free trial versions (Win and Mac) for you to use in advance. Next, you can follow the 1-2-3 simple steps below: 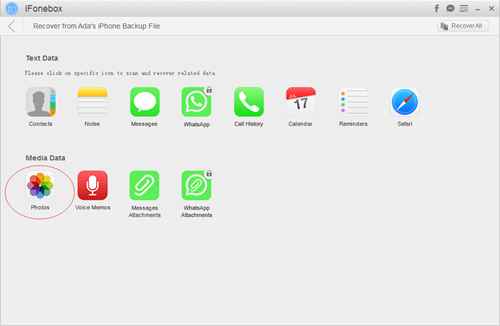 What about transferring restored photos from computer to iPad Mini?

If you want to transfer the restored photos from your computer to your iPad Mini or other iOS devices, you need iTunes for help. After the process of extraction, now you can firstly create an empty folder on the computer desk and then, copy all transferred photos to this folder. Next, run iTunes, connect your iPhone 5 to the computer. Choose your device in the iTunes option panel. Then choose Photos and sync photos to your iPhone. You can choose the folder from the local files in your computer.