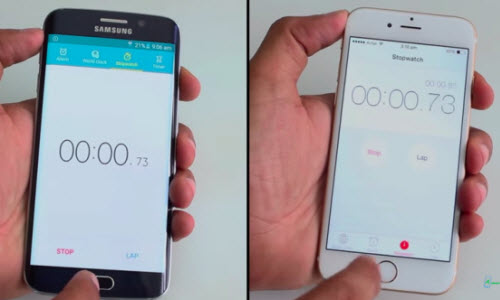 A few days ahead of Samsung’s Galaxy S7 and Galaxy S7 edge unveiling last month, I spent some time previewing both new phone models. I was thoroughly impressed. It’s impossible to draw any real conclusions in just a couple of hours, but Samsung’s new flagship phones were clearly class leaders in several key areas. The designs were sleek, the materials were premium, the displays were amazing and the cameras were remarkable.

As a longtime iPhone user, I began to have some serious doubts.

I’ve since spent a little bit more time with the Galaxy S7 and S7 edge, and I’m even more impressed than I was initially. I’m a huge fan of the Galaxy S7 edge in particular; I tried very hard to get used to the iPhone 6s Plus because I want a bigger display than the one on my iPhone 6s, but it’s far too large to use comfortably.

It’s the one iPhone I couldn’t live with.

Meanwhile, the Galaxy S7 edge has a display that also measures 5.5 inches diagonally, but its design is much more compact than Apple’s 6s Plus design. The rounded glass on the front and back also make it fit much more comfortably in the hand, and the design lets you reach much further across the screen with one thumb than you can on the iPhone phablet.

Apart from comfort, the Galaxy S7 edge is a beautiful phone. It’s not an iPhone copy to the extent that Samsung’s earlier Galaxy phones were, but it has characteristics that make it look and feel almost like a phone Apple would build. That’s high praise considering where Samsung’s phones were just a few short years ago.

The Galaxy S7 edge also has me questioning my choice of handset where several key features are concerned. The 2K ultra HD display is so much better than the 720p screen on my iPhone 6s that they’re barely in the same league at this point. And despite some curious conclusions, my early testing has found that the camera on the Galaxy S7 edge is just as impressive as I thought it would be in my preview.

But as impressed as I am with the Galaxy S7 edge, there’s one single thing that will prevent me from ever even considering a switch: Android.

Now, before the hardcore Android fans start losing their minds in the comments section (which we never read anyway), there is nothing wrong with Android and I’m not suggesting that anyone else should switch away from it. Google has done a great job refining the platform over the years, and the version of TouchWiz on the Galaxy S7 is by far the least offensive build so far.

But it’s just not on the same level as iOS.

If you value customization above all else, Android is the platform for you. If you want the freedom to use apps that control core Android features with almost no restrictions imposed by the operating system’s creator, it’s Android all the way. But if you want a simple and versatile user experience that is impossibly smooth, Apple’s iPhone is the clear choice. And if you want a third-party mobile app experience that remains miles beyond anything else available, iOS is it.

After all this time, Apple is still king when it comes to user experience. And iOS developers are still king(s) as far as third-party apps go. The developer ecosystem, the guidelines, and the tools Apple provides are just too good. Apps are consistently smooth and simple, even when they provide complex functionality.

Even big-name developers that build the same app for both platforms almost invariably end up creating a significantly better experience on iOS.

Android is the most popular mobile platform in the world thanks to Google’s distribution model, and this will be the case for the foreseeable future. But the iOS experience is still superior — and the way iOS interacts so smoothly with OS X is an added bonus.

In terms of hardware and design, the Galaxy S7 edge is the best phone I have ever used… and I’ve used them all. And to be perfectly frank, based on what I’ve heard so far, the Galaxy S7 edge will likely still be the best even in late September this year after Apple unveils the iPhone 7. But Android is still a big roadblock for me and many others, and it’s the reason so many people began switching from Android to iOS when Apple finally released iPhones with larger displays in 2014.

Original Post: I really want to, but I’ll never ditch my iPhone for the Galaxy S7

How to Transfer Text Messaegs from iPhone 6s Plus to Mac?