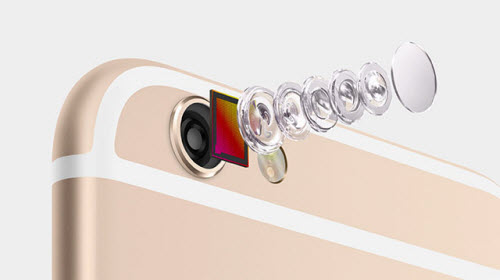 Apple makes a number of improvements to the camera system of the device according to iphonehacks, every time it rolls out an new model of iPhone, which always produces better imaging quality than the previous models. The iPhone 6s/6s series is no exception.

Check out the in-depth rundown of all the new camera features in the iPhone 6s and iPhone 6s Plus below to find out what other new features they pack.

12MP camera
The biggest and easily noticeable change in the camera specifications of the new iPhones, is that they come with a higher resolution and make use of “state-of-the-art” sensor. The increase in resolution also means that images shot from the iPhone 6s will have more detail than previous iPhones.

4K video recording
Another highlight of the new iPhones is their ability to record videos in 4K resolution. While Android phones have been able to record videos in 4K resolution since quite sometime, the detail and clarity offered by the 4K resolution videos shot from the iPhone 6s and 6s Plus will be unmatched.
You will also be able to shoot 8MP photos while recording 4K videos on the iPhone 6s and iPhone 6s Plus. Since the new iPhones also feature three microphones, they should offer better audio quality while recording videos when compared to their predecessor.

Live Photos
With Live Photos, Apple is making still images a thing of the past. The new 12MP camera on the iPhone 6s and iPhone 6s Plus is able to capture moments right before and after you take a picture with sound, so that you can revisit the moment when you clicked the picture in the future. As Apple puts it, Live Photos helps in converting those frozen instant in time to “unforgettable living memories.” These “memories,” however, will only be 3 seconds long.

How To Transfer All Photos From iPhone 6s To iMac?

Recover Lost Photos From iPhone During Cut And Paste