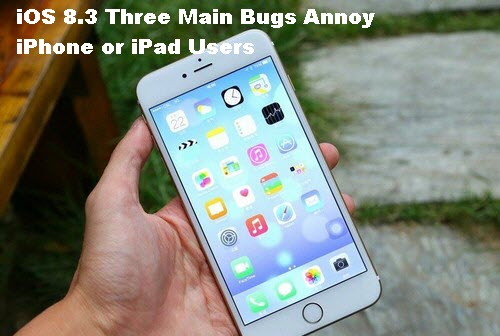 “Hello everyone, I updated my iPhone 4s to iOS 8.3 on last Saturday 04/11. Now I am having issues with the camera. It doesn´t work at all, not for taking pictures nor videos. What can I do? Anybody else is having the same issue? Thanks for your replies. iPhone 4S, iOS 8.3“

Have you got the problem as the above user? iOS 8.3 was released to the public a bot more than a week ago. It was all going so well but judging from the complaints from Apple community, most people are complaining about the unsolved WiFi issue, Camera Roll problem like the above user as well as iCloud space issue, which are the three main bugs now for iOS 8.3 and annoys most iPhone or iPad users.

WiFi bug has been a long-lasting annoying issue. Judging from the number of posts discussing this issue on the Apple Support Communities site, this is a pretty widespread problem.

What makes those suffering through this bug annoy, is that one of the items on the changelist for the new build specifically states that it “Addresses an issue where some devices disconnect intermittently from Wi-Fi networks.” This is an issue that actually dates back to last September’s release of iOS 8.

Another blast from the past: for some iOS 8.3 users their photos are disappearing. Or to be more precise: they can’t be found because their chronology is jumbled.

In one of a number of threads to pop up on Apple Support Communities, user LukeD sums up the problem saying: “I have upgraded my iPad Air 2 and my iPhone 6 to iOS 8.3 only to find that only on my iPad is my camera roll out of chronological order. This problem did not happen on my iPhone. I had tried erasing and reinstalling from my backup, to no avail.”

An interesting quirk finds apps which access the camera roll do show photos in chronological order, which has reassured most that their photos are not lost, but opening the camera roll itself is a complete mess.

The third issue deals with data from iCloud that shows incorrect total storage figures. By showing that iCloud users have much more content stored away than they really have, this bug is limiting the ability of iOS 8.3 users to store data, media and content in the cloud. The problem seems to show up for those with multiple iOS devices employing the same iCloud account. One person complained that his iPad mini shows that he has 1GB of iCloud storage remaining while his iPhone correctly shows that he has 5GB of memory available.