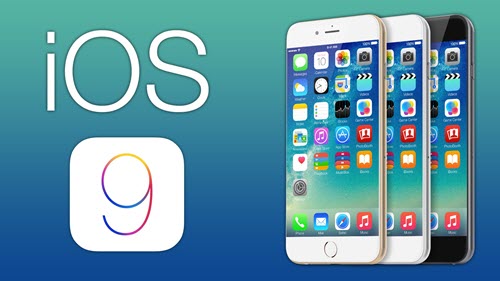 Apple announced its new iOS 9 officially at WWDC 2015 keynote. This time, more compelling features are unveiled from iOS 9. iOS 9, which is designed to improve upon iOS 8, has four central areas of focus: intelligence, apps, iPad multitasking, and foundation.

iOS 9 is full of enhancements you’ll appreciate every day. Your apps become more essential. New multitasking features on iPad make you even more productive. Siri can do more than ever, and new proactive suggestions help you get things done before you ask. And improvements at the foundation of the operating system enhance performance, battery life, and security. The more you do with iOS 9, the more you’ll wonder how you ever did without it. Now, let’t have a detailed and specific view at those new features.

The new, more proactive Siri is contextually aware and can offer you more information than ever. For instance, if a user runs every morning Siri can offer music to listen to when the user plugs in their headphones. The music is context sensitive and is dependent on time and place, so if a user is in the car Siri may offer an audiobook or podcast instead of music if that’s what the user usually does. If someone calls a user with a number not in their address book, Siri can now look through email to see if it can identify the number. If it can, it’ll display it.

iOS 9 has also been updated with a brand new Search window, which offers commonly used apps or contacts, one-tap links to nearby locations and breaking news. There’s also a brand new API for Search, which means that it can now pull up content from within apps. When you tap on the information, you’re deep linked into the app. This new search feature is accessed by swiping left on the home screen.

With the new Search and Siri features, Apple placed a heavy emphasis on privacy. All features are anonymous and are not linked to an Apple ID, with users in control of data and content.

In iOS 9, Notes app also get updated. Now it’s great for so much more. Want an easy way to make a checklist of to-dos? Consider it done. Or add a photo, map, or URL to a note. You can even draw a sketch with your finger. And thanks to iCloud, changes to your notes will be updated across all your devices and on iCloud.com. So you’ll always have your latest notes in hand. 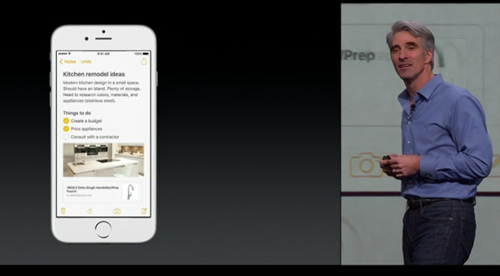 Another major update in iOS 9 is Maps. Now you can use public transportation with Maps as your guide. In select cities around the world, a new Transit view shows you lines and stations right on the map. When you plan a route, every step of your trip is laid out from point A to point B. And with the Nearby feature, it’s easier to see what’s around you and decide on places to shop, eat, and more. 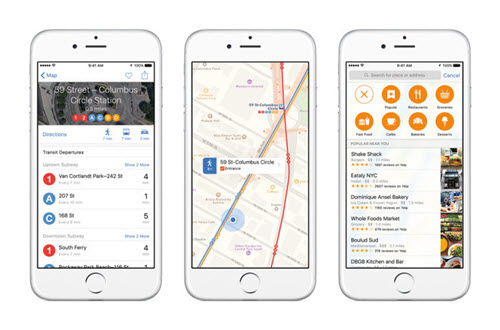 This time, iOS 9 has added News app to your Home Screen. News conveniently collects all the stories you want to read, from top news sources, based on topics you’re most interested in — so you no longer need to move from app to app to stay informed. News also combines the rich and immersive design found in print with the interactivity of digital media, letting you enjoy stunningly crafted articles just how the publisher intended. 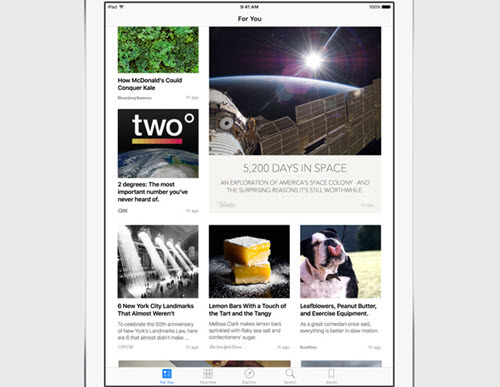 Now you can use Apple Pay to make purchases with your Discover card or store credit cards, like Kohl’s Charge or JCPenney Credit Card. Add reward cards, like Dunkin’ Donuts DD Perks, Walgreens Balance Rewards, and MyPanera, to yourWallet app and receive and redeem rewards using Apple Pay. And now you can just double-click the Home button when your iPhone is locked to access Wallet and quickly pay with Apple Pay.

If your car supports wireless connection to iPhone, you can use CarPlay without plugging in. CarPlay also plays audio messages, so you can hear from people in their own voices. If you use your car’s knobs to control CarPlay, you can now take full advantage of the way they tilt and spin to scroll through lists or pan around in Maps. And apps developed by car manufacturers are supported, too — so you can control more of your car’s features without ever leaving CarPlay.

Slide Over, Split View, and Picture in Picture give you new ways to multitask on iPad. Your iPad is great for work. And for play. For creating incredible designs or powerful presentations. For building fun slideshows or video chatting with loved ones. And for tons of other stuff. Now you can make even better use of its large screen to do two of those things — at the same time.

Shape up your text in no time with an all-new Shortcut Bar, convenient editing tools, and a handy new way to selecttext with Multi-Touch gestures. And now when you use a wireless keyboard with your iPad, you can enjoy even more keyboard shortcuts.

Apple also announced Swift 2, an upgrade to its programming language, and made Swift open source. iOS 9, which is a free update, is available to registered developers immediately, and it will be available to public beta testers beginning in July. A public release will come in the fall.

New Rumors That iOS 9 Is Supposed To Support Older Devices

What You Need To Know About Apple iOS 9