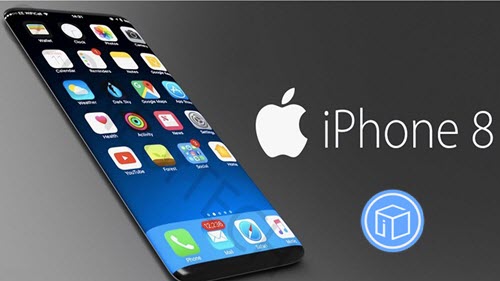 With each new iPhone 8 leak that we’ve seen so far, it becomes increasingly obvious that the hottest iPhone that Apple will launch this coming fall. So what are new features with the approaching iPhone 8? Are you curious about it? Here, I have collect several new features from iPhone 8, let’s have a look together.

The iPhone 8 is expected to feature a radical redesign, with an edge-to-edge display that does away with the top and bottom bezels where features like the Touch ID fingerprint sensor and the front-facing camera are housed. Instead, rumors suggest Touch ID will either be built into the display or eliminated entirely in favor of facial recognition technology, which Apple is confirmed to be working on. Either way, there will be no physical Home button on the iPhone 8 and no bezels aside from a small area for the front-facing camera.

cannot miss: How To Retrieve Lost Passwords Notes From iPhone 8/7/6?

It is said that there will be a flexible plastic OLED rather than an LCD, allowing Apple to introduce a thinner device that consumes less power and offers a better display with higher contrast ratio and more true to life colors. It will feature a slightly curved 2.5D display that’s similar to the display used in the iPhone 7.

As for the body, Apple is finally moving away from the aluminum used in the iPhone 5, 5s, 6, 6s, 7, and SE, and will instead adopt a glass body that’s similar to the body that was used for the iPhone 4. According to analyst Ming-Chi Kuo, the glass will be built around a polished stainless steel frame that’s similar in design to the Apple Watch. Other models will also feature glass, but with an aluminum frame.

The iPhone 8 may feature an IP68 water resistance rating, an improvement over the IP67 certification earned by the iPhone 7 and the iPhone 7 Plus. Like the Galaxy S7, which is also IP68 certified, the iPhone 8 might be able to withstand 1.5 meters of water for up to 30 minutes while also offering full dust protection.

That means it will continue to hold up to splashes and brief immersion in water, but customers should still make an effort to avoid water as Apple’s iPhone 7 warranty does not cover water damage and it’s likely the iPhone 8 warranty will also exclude water damage.