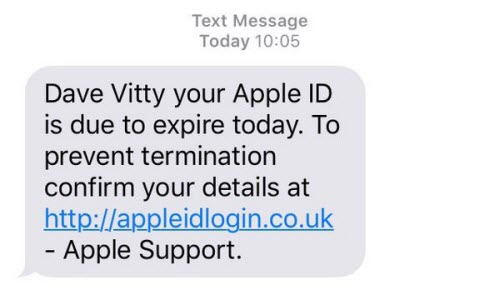 Watch out, iPhone users. A text-message phishing scam, disguised as a note sent by Apple Support, aims to lure unsuspecting iPhone owners to share their usernames and passwords.

The scam, which appears as a shady text message, is reportedly informing users that their Apple ID has expired and they’ll need to visit a fake website to receive a new one.

The tactic, first spotted by publication The Independent and as seen in screenshots on Twitter, is a way for hackers to gain access to personal login information as well as other details, including passport numbers.

“[Name] your Apple ID is due to expire today. To prevent termination confirm your details at appleidlogin.co.uk — Apple Support.,” the message reads.

The website appears to be targeting only those in the UK.

Although Apple has not yet responded to a request for comment, it states on its official support page that the company does not typically approach users via this method.

“As a general rule, never send credit card information, account passwords, or extensive personal information in an email unless you verify that the recipient is who they claim to be,” Apple states. “Many companies have policies that state they will never solicit such information from customers by email.”

Apple also notes that a common phishing technique is to “include links in an email that look like they go to a legitimate website,” so users should take extra steps to verify whether or not the link is legit.

This isn’t the first time hackers have cooked up phishing scams targeting iPhone users, but it’s less common that these occur by text message.

How To Track Deleted Text Messages on iPhone?

How To Print Text Messages from iPhone?

How To Sync iPhone Text Messages In Three Different Ways?