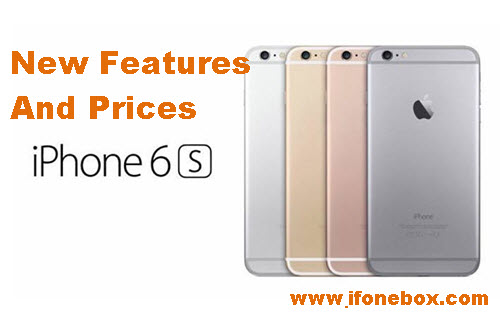 The prices listed below are in U.S. dollars.

– Design: iPhone 6s and iPhone 6s Plus look the same as the iPhone 6 and iPhone 6 Plus, with 4.7-inch and 5.5-inch screen sizes respectively, although Apple did make the switch to stronger ion-strengthened glass and slightly thicker Series 7000 aluminum. A new Rose Gold color option was introduced to the iPhone 6s lineup alongside existing Space Gray, Silver and Gold models.

– 3D Touch: 3D Touch builds upon both Apple’s patented Multi-Touch and pressure-sensitive Force Touch technologies, enabling users to make “peek and pop” gestures on the screen with their fingers to access actionable shortcuts or preview content, such as text messages, flight information, calendar appointments and more.

– A9 Chip: iPhone 6s and iPhone 6s Plus are powered by a 64-bit Apple A9 chip and embedded M9 motion coprocessor that deliver up to 70% faster CPU performance and up to 90% faster graphics compared to the A8 chip inside the iPhone 6 and iPhone 6 Plus.

– Improved Cameras: iPhone 6s and iPhone 6s Plus have 12-megapixel rear-facing iSight cameras with 4K video recording (3840×2160) and 5-megapixel front-facing FaceTime cameras with display-based Retina Flash. Optical image stabilization is now available for both photos and videos, but remains limited to the iPhone 6s Plus.

– Faster Touch ID: iPhone 6s and iPhone 6s Plus have a second-generation Touch ID fingerprint scanner that is up to two times faster compared to Touch ID on previous iPhones.

One more thing, when you want to upgrade to iPhone 6s, it is necessary and important for you to have a full-backup for your old iPhone data with iFoneBackup, just in case of data loss problem.