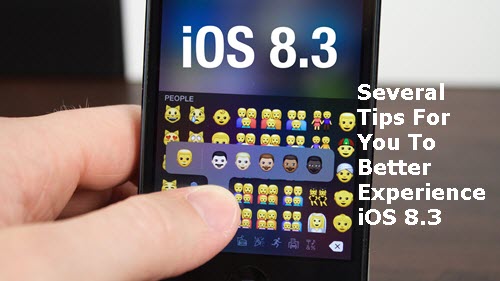 iOS 8.3 has been released for days and three long-lasting bugs of iOS 8.3 may annoy some iPhone or iPad users. But of course, every coin has its two sides. Some useful tips of iOS 8.3 you should know to make you better experience iOS 8.3.

Battery saving problem is a problem most people concern about. Although, the tech giant never specifies the apps that sap battery life out of the device, it reportedly allows Apple users to check the apps that consumed significant battery charge over a period of 24 hours or 6 days. With this feature, users can remove the unused apps that deplete the battery life by going to Settings -> General -> Usage -> Battery Usage.

Apparently, all audio and video messages sent via Apple iMessage will be automatically deleted from the iPhone or iPad within two minutes from the time the send button was clicked. This default setting can reportedly be changed by navigating to Settings -> Messages -> Audio Messages/Video Messages and switch off the expire setting.

In case, Apple users are unable to send iMessages over data connection, the same message can reportedly be sent as an SMS instead. In order to achieve this, navigate to Settings -> Messages and check the appropriate boxes.

In case, iPhone users are in a hurry, this particular option will come handy. To send a quick voice message, users can tap the new “mic button” that is located on the right side of the text box. This way, one can kick start the recording process and send the voice message quickly.

After installing the iOS 8.3, some people may dislike the new features or just annoy the bugs, so if you want to downgrade to the previous version, just do it.

Apple iOS 8.3 Tips And Tricks With Respect To Messages, Jailbreak, Emojis, Downgrading To iOS 8.2 And More