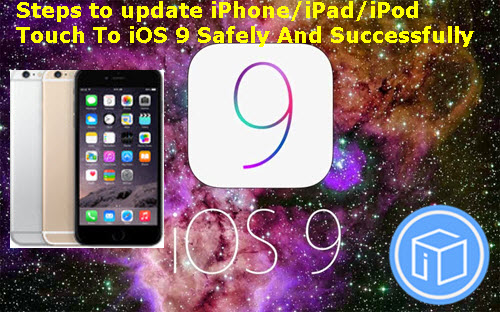 As is known that iOS 9 is going to be released this month, so how to update your iPhone/iPad/iPod Touch to iOS 9 safely and successfully? Here, I want to share some reminders and tips for you to update your iDevice to iOS 9 to better experience new features from iOS 9. Some are extracted from PC Advisor.

What to do before update to iOS 9?

1. Check iOS 9 compatiblity. Before update to iOS 9, the first thing you need to do is to check whether your iPhone or iPad is compatible with iOS 9. iOS 9 works with all devices that are able to run iOS 8, including the older A5-based iPhone 4S and iPad 2. Compatible devices include the iPhone 4S and newer, the iPad 2 and newer, and the original iPad mini and newer.

2. Update the apps installed on your Apple device. Some of them might not work in iOS 9 if they are already out of date.

3. Check the free storage space. Please check the free space available on your iPhone, iPad or iPod. The iOS 9 update requires a minimum of 1.3GB of storage to be able to download the new software.

4. Free up some space before update. You can free up more space for the update by transferring photos and videos to your PC which usually take up much space. Also let go of those apps you no longer use or need as well as clear cookies and histories from Safari.

5. Back up your Apple devices to iCloud or computer. It is important to have a full-scale backup for your iPhone or iPad data. You can use iTunes/iCloud or iFoneBackup to do the backup work. Just a precaution in case anything bad happen during update.(Top 3 Software To Back Up Data From iPhone/iPad/iPod Touch)

Usually you will receive a notification on your device once the software update is released. To manually check if iOS 9 is already available, go to Settings > General > Software Update. Tap Download when prompted and then tap Install to upgrade to iOS 9.

How to update to iOS 9 via iTunes

Update your iTunes to the latest version if you haven’t done yet. Connect your iPhone, iPad or iPod to a computer running iTunes. A message will appear indicating that the iOS 9 software update is already available. Otherwise, click on the Devices list and then the Check for Update button. Click Download when prompted and then click Install to upgrade to the new software. Ensure that your Apple device being updated to iOS 9 is connected until the process is finished.

How to update your iPhone, iPad or iPod to iOS 9

How to update your iPhone, iPad or iPod to iOS 9

How To Recover Deleted Contacts From iPhone 5s After Update To iOS 9?