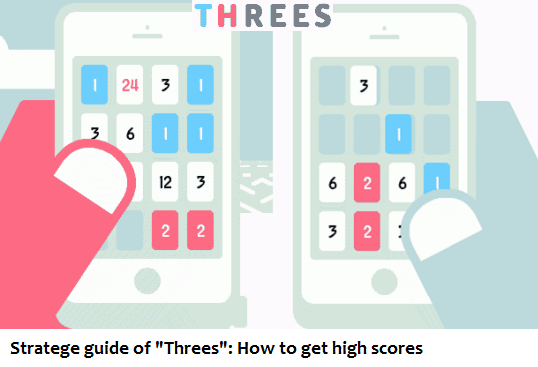 Threes![$1.99] is a simple-on-the-surface-but-hypnotically deep numerical puzzle game.  We couldn’t quite come up with thirty-three tips for the wonderful iOS puzzle game, Threes!, and just three seemed like too few, so let’s go with nine tips (3 x 3). For those unfamiliar, Threes! is a thoughtful and lighthearted game without ads or in-app purchases. By sliding a board of numbered cards in four directions, players aim to get adjacent and identically-numbered cards to stack on top of one another. Every turn introduces a new tile on the board, which means you’ve got to keep stacking to make room. When the board fills up, you’re given a score based on the value of the cards left, which in turn gets posted on the Game Center leaderboards.

Threes! is elegant, fun, and challenging, and you should definitely pick it up if you haven’t tried it yet. 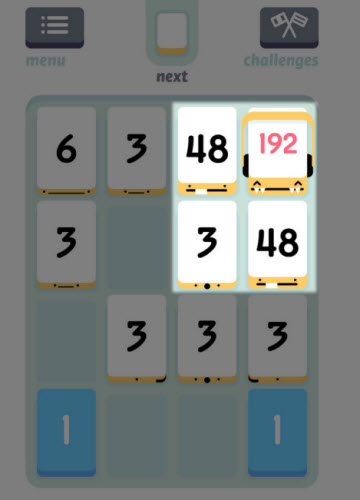 While some folks prefer to play the center, the most widely accepted method of doing well in Threes! is to get your high-scoring cards in one of the corner and perpetually move cards in that direction. This means most of your gameplay will only involve moving in two directions. With the highest-scored tile right in the corner, it minimizes how much chasing you have to do to match it up. Besides, there aren’t going to be many cards to pair up with your top one, so a central, easily-accessible location is better served by lower-value cards. With other high-value cards drifting in the same direction, it’s easy for them to find their matches huddled around that corner.

Sometimes it can be tempting to beeline for big matches without considering anything else on the board. Though you may very well get that big match, you can also find yourself with few free spaces afterwards. Often in these situations, your high-scoring pair will be close enough together that you can clean up a few other cards while still keeping them together.

The slow slide gesture is a great way of seeing how a move will pan out. Just drag in the direction you’re thinking of going, but don’t take your finger off the screen. Slide back to the original position if you don’t want to make the move. If you’re stuck, drag in each of the four directions to see what will stack up with what before deciding which way to go. This is especially helpful when your board has both blockages and openings in weird places that make visualizing a move difficult. It can also be helpful when considering which way to pair two cards; make sure to try both directions, if available, and see which leaves you in a better position 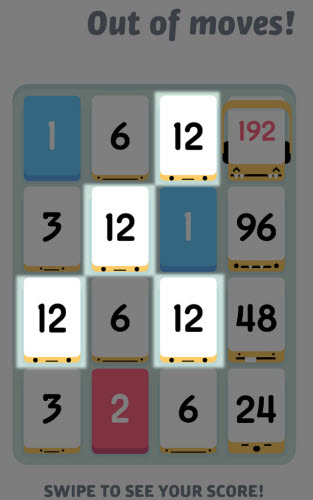 Having cards alternating between high and low along any given row is a bad thing. It’s hard to get them to wrap around for a pair on a packed board, so try to keep your low-value cards in one half of the board, and your higher ones in another. This will happen somewhat naturally if you’re working the corner as per tip #1, but even then, keep an eye out to make sure you aren’t isolating cards by sandwiching them between other cards with much different values.

5. Watch the next tile

Though a big part of the game is the luck of the draw (i.e. which card comes next), you can still plan accordingly. First off, new white cards on the board are always divisible by three. Count on them being a 3, sometimes a 6, and rarely something higher. Also remember that new cards arrive from the edge you’re swiping away from. For example, if you have a red 2 card coming up and two viable directions to swipe in, swipe away from the side that has a blue 1 card. With any luck, the new card will show up close enough to be paired in two swipes.

6. Sometimes a move is better than a match

Ideally you want to have as much free space as possible, but that’s not always the case. If there are a lot of empty cards and not a lot of options for pairing, it may take a swipe or two in order to get useful cards and close the gap between your existing ones. Also, it may be worth slight readjustments in order to pair up multiple cards at once or high-value targets. 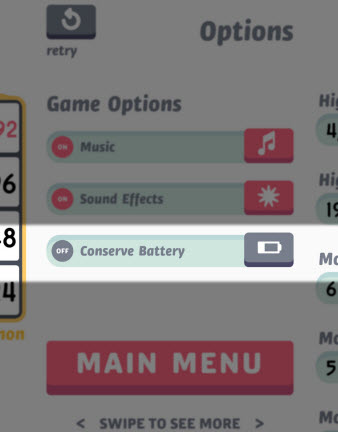 1s and 2s take priority when matching, since they aren’t worth any points when you run out of turns, they have limited matching options elsewhere, and once graduated to a higher value, makes them much more useful to pair up with other cards. This is especially important in the later game when the board is primarily high-number cards. White cards apparently show up a little more frequently as your progress, but not much.

Keep in mind that there are no timers in Threes! You aren’t being rushed into your next move. You can even leave a particularly high-scoring game and come back to it later. With too many mobile games, it’s easy to get twitchy, but if you’re remotely interested in doing well and can’t afford the time to really think about your next move, save your turn for later. 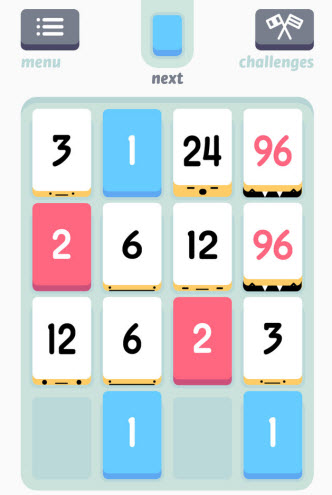 If you’re having a real Threes! marathon, flip on the Conserve Battery mode under options. This chops the framerate from 60 fps to 30 fps, which is still entirely playable and will extend the amount of time you can spend clawing at the leaderboards. On an iPad, you may be less concerned with battery life, but if you get sucked into a particularly lengthy session on the iPhone, you may be kicking yourself for not turning this mode on. (Lower the screen brightness while you’re at it.