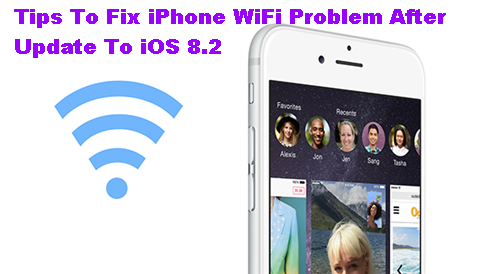 Last week, iOS 8.2 was released officially and indeed, iOS 8.2 has solved some bugs of the previous iOS versions. However, inevitablely, new bugs will also come. In my previous article, I have share some information about tips to save battery life after update to iOS 8.2. Today, I want to show you some tips to fix iPhone WiFi problem after update to iOS 8.2, also an annoying issue which have been complicated by iPhone/iPad users for years.

Some people have reflected that they could not connect to WiFi network after upgrade to iOS 8.2 and they need some tips. Keep reading here and some useful information is offered.

The first fix is a simple one. iPhone and iPad users should try resetting the device’s network settings. This is an extremely easy process though it could take a couple of minutes to complete. Those experiencing WiFi issues will want to set aside some time to ensure that the process goes as smoothly as possible. To do this, open up the iPhone, iPad or iPod touch and head to Settings > General > Reset > Reset Network Settings.

If that fix doesn’t work, take a look at some of these other potential WiFi fixes. We also recommend rebooting your router and or modem to see if that dislodges the problem. It’s also worth updating the router’s firmware. This process is going to differ based on make and model so iPhone and iPad users will want to consult company websites for help.