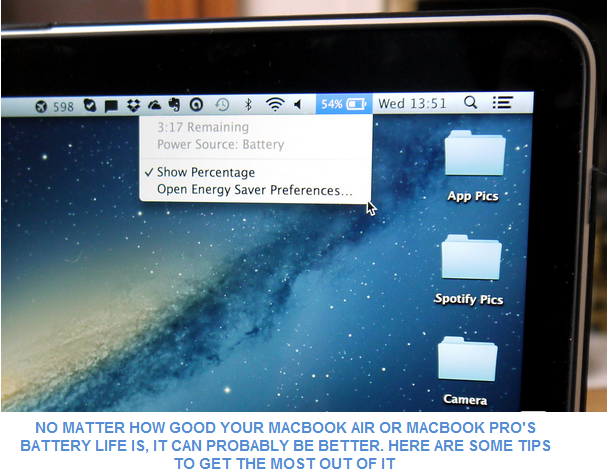 OS X Mavericks software and Haswell chipsets meant Apple could put a lot of emphasis in 2013 to improving battery life and power efficiency in its laptops. But that doesn’t mean we can’t do better. We can always do better. So here’s five suggestions for how to improve the battery life of your MacBook Air or MacBook Pro even more.

If you haven’t upgraded to OS X 10.9 Mavericks, consider doing so — especially since it’s a free upgrade as long as you’re running Snow Leopard (10.6) or later. Apple incorporated a lot of “under the hood” improvements to Mavericks to improve power efficiency as much as possible.

Mavericks’ support of Timer Coalescing causes the CPU to drop into a low power state when it’s not doing anything, while App Nap, another Mavericks feature, reduces the amount of effort the CPU expends on an app in an idle state. Mavericks also sports Safari Power Saver, which keeps Flash content from loading on a web page unless you give Safari permission, so you won’t have runaway Flash processes running on your Mac. Even iTunes in Mavericks runs more efficiently.

Don’t be afraid to manipulate the settings in the Energy Saver system preference. You can set the amount of time your laptop will use to put the computer to sleep and the display to sleep separately. Apple’s pretty conservative with its default settings, but you can tighten up the computer sleep setting even further.

Also, if your Mac has both integrated and discrete graphics (like many 15-inch MacBook Pros), take a look at gfxCardStatus. This free app will let you shut off your discrete graphics system all together. Though that’ll make graphics intensive apps like image editors and games run slow, it’ll save you lots of juice.

When you’re working from the battery your MacBook should automatically dim itself a little bit. But you can adjust this level down even further, and the more you do, the more significant your battery savings will be.

Obviously don’t create a situation where you’re giving yourself a lot of eye strain to see the screen, but if you’re working in a dimly lit environment or at night, you can gain a lot of extra battery life by dimming the screen as much as you’re comfortable.

4. Turn off Wi-Fi and Bluetooth

If you don’t need to be connected to the Internet or your local network, then by all means shut off AirPort all together. Wi-Fi on its own uses a fair amount of power, and the apps that you often run connected to the Internet, like e-mail and web browsers, draw down even more. If you can live without a live network connection, you candramatically extend the life of your battery without having to recharge.

By the same token, if you’re not using external wireless peripherals that communicate via Bluetooth — some keyboards, nice, speaker systems and other peripherals — then please turn it off. Both AirPort and Bluetooth can consume significant amounts of power.

If you’re accustomed to having stuff connected to your Mac’s ports while you’re working on a battery, consider changing your habits. An external hard drive or SuperDrive, camera, 4G dongle, even an SD card will draw down the life of your battery as the Mac powers the bus the device is connected to and transmits and receives data. Needless to say, if you’ve got an iPhone or iPad plugged in, they’re recharging themselves at the expense of your MacBook’s battery.