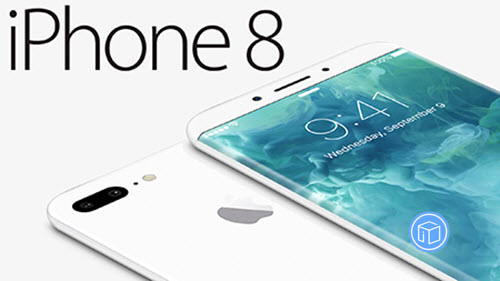 As iPhone 8 is going to be released this autumn, most people will change their old iPhone to the new one, for iPhone 8 has made a greater change compared with iPhone 7. Here are top 7 tips you should know about iPhone 8 before buying.

This iPhone 8 new function is presently the talk of the town. According to the speculations, Apple will be revamping the entire look and feel of iPhone 8 with a curved display. This would make it the first iPhone to have a curved screen. Moreover, the signature home button will also be eliminated from the body and would be replaced by a Touch ID.

2. Touch ID on the OLED screen

If you wish to learn how to use iPhone 8 efficiently, then you need to know how to operate the device. A new user might get confused while unlocking the device. It is expected that iPhone 8 will have a Touch ID (fingerprint scanner) right on the OLED screen. The optical fingerprint scanner will be the first one of its kind.

Also read: iPhone 8 Is To Be Released With New Features

Yes! You have read it right. To provide a superior surround-sound to its users, the device is expected to have a secondary speaker. Not just through wireless headphones, you can listen to your favorite songs on the secondary stereo speakers of your new device as well.

The new iPhone is expected to take the waterproof feature of its predecessor to a new level. The device will be dustproof, letting you use it without any trouble. Also, if by accident, you drop it in water, then it won’t cause any damage to your phone. According to the experts, the new iPhone 8 can stay underwater for as long as 30 minutes. This will certainly let you make most of the iPhone 8 without any trouble.

Just like humans, Siri can also provide the wrong pronunciation of a word (mostly names). You can teach Siri the correct pronunciation by simply saying “That’s not how you pronounce <the word>”. It will ask you to pronounce it correctly and will register it for future use.

This is a mere speculation, but if it turns out to be true, then Apple would certainly be able to change the game in the smartphone industry. Not only is iPhone 8 expected to be charged wirelessly, but the rumor has it that it will also have a solar charging plate. It would be the first device of its kind that would be able to charge its battery from an inbuilt solar plate. Now, we all need to wait for a few months to know how much of this speculation would be true.

7. Ask for random passwords from Siri

We can’t list out iPhone 8 tips without including a few Siri tricks. If you like to create a new and secure password, but can’t think of anything, then you can simply take the assistance of Siri. Just turn on Siri and say “Random Password”. Siri will provide a wide range of alphanumeric passwords. Furthermore, you can restrict the number of characters in the password (for instance, “Random password 16 characters”).

PS: in order to backup and manage your iPhone 8 data, please let iFonebox help you, which is a professional iPhone data recovery tool to help you recover deleted or lost data like messages, contacts, wechat data, notes, whatsapp messages, etc, from iPhone directly or bakcup selectively.