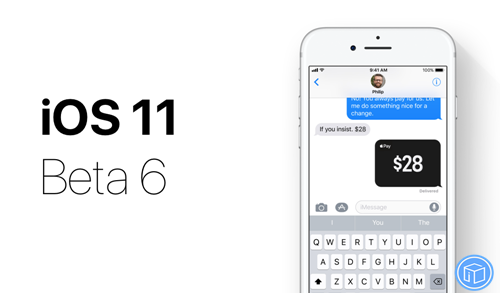 Apple seeded the iOS 11 beta 6 to the developers for test purpose and it is said that iOS 11 will be released officially this September 17, along with new iPhones. Quite exciting. So what is new in iOS 11 beta 6? What’s fixed?

According to MacRumors, today’s beta brings a fix for an issue that caused the DirecTV app to crash on launch, but introduces a new issue that could cause Audiobus 3 to crash. Launching the App Store no longer stops other audio that’s playing, several bugs with Family Sharing features have been fixed, and all phone numbers are now displayed during a multiparty conference call.

There are also fixes for Notes, addressing an issue that caused the app to malfunction when restoring from a backup where the Notes app was deleted and a problem that prevented the Apple Pencil from working when an iOS device was rotated. A new known issue prevents an AT&T data plan purchased on iPad from updating the cellular data number in Settings > General > About.

As for outward-facing changes, there are new icons for the App Store and Maps and the Reminders icon is now fixed with bullet points back on the left instead of the right. There’s also no toggle to turn off Auto Brightness in the Display & Brightness section in this beta. Instead, the feature must be toggled off using in Settings > General > Accessibility > Display Accommodations. The app tray in Messages has also been tweaked with the aforementioned new App Store icon.

iOS 11 introduces several design changes, including a customizable Control Center and a new Lock screen that’s been merged with the Notification Center. Peer-to-peer Apple Pay payments are coming in the Messages app, which is also gaining a new App Drawer, and there’s a Do Not Disturb While Driving feature that’s meant to help drivers stay focused on the road. Siri, Photos, the Camera app, and more are also gaining new features and refinements.