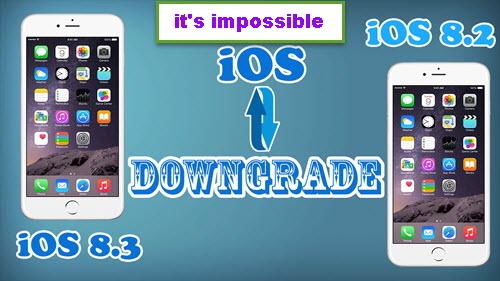 It has been days past since Apple released its new version iOS 8.3. New features always come with bugs and new problems, so does iOS 8.3. Some people regret to update to iOS 8.3 and want to downgrade to previous version iOS 8.2. Now, news is Apple has stopped iOS 8.2 code signing, which means you cannot downgrade from iOS 8.3 to iOS 8.2.

According to AppleInsider, the change was pointed out by various developers on Twitter such as Steve Troughton-Smith. Apple regularly stops signing older versions of iOS once there are no longer any worries about an update causing major security or functional problems.

People with jailbroken devices must now be especially careful about avoiding updates to iOS 8.3, as it will return a device to factory settings without a means of undoing the process.

Two betas of iOS 8.4 have been released by Apple, which incorporates a radically redesigned Music app with components like a persistent MiniPlayer. There’s no indication of when it will reach the public, but it will presumably be finished by the time Apple’s Worldwide Developers Conference arrives on June 8.