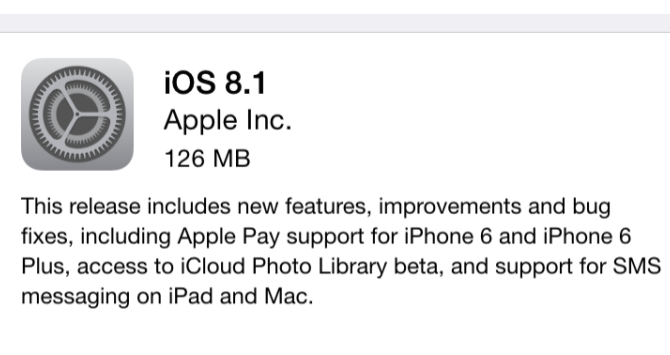 Apple released iOS 8.1 this morning, The release adds support for Apple Pay, SMS Relay, Instant Hotspot, iCloud Photo Library, and more.You can update your device either over the air or using iTunes.

Apple Pay will allow iPhone 6 and iPhone 6 Plus owners pay securely using their phones at participating retailers. Additionally, some merchant apps will allow you to pay for goods and services using Apple Pay.

iOS 8.1 will also see the beta of iCloud Photo Library become available for all users. iCloud Photo Library syncs your photos across all of your devices, and uses you iCloud Drive storage space. Those users that have been missing their Camera Roll will be happy to find that it has made a return with iOS 8.1.

SMS relay, which allows you to view your iPhone’s standard SMS and MMS messages on your iPad or Mac, will also be available with iOS 8.1.

I upgraded my iPhone 6 to iOS 8.1 without any issue. Let me know if you’re facing any problems after upgrading to iOS 8.1.