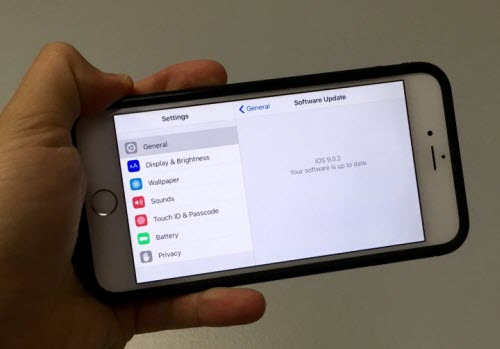 Apple released iOS 9.0.2 on September 30th with bug fixes and performance improvements, just a week after the iOS 9.0.1 update and two weeks after the iOS 9 was available publicly. It is a minor update, but it could have a big impact on the performance of your iOS devices.though there have been  iPhone 6 iOS 9.0.2 problems posted to forums.

This  iOS 9.0.2 update contains bug fixes and improvements including:

After learning about the updates and now it is time for your to decide whether you would like to install the update.  Will you?

If you’re concerned with your device’s security, you might want to install the iOS 9.0.2 update right now because it comes with an important security patch for a well-known passcode flaw that was discovered a few days ago. Shortly after the iOS 9 release, iOS users discovered a passcode flaw that could allow someone to bypass the lock screen and look at contacts and photos. For some people, that could be a huge problem.

If you use podcast a lot, head on to download and install the iOS 9.0.2. The iOS 9.0.2 update doesn’t overhaul the Podcasts application but it does feature a stability update that could come in handy for those that have been dealing with problems since iOS 8 and those who are noticing issues in iOS 9. We’ve been poking around the Podcasts app and so far, the app feels extremely stable. If you’ve been seeing problems, iOS 9.0.2 might be the update you’ve been looking for.

And if you have any problems iOS 9.0.2  has been trying to fix, don’t hesitate to give it a shot. Though the iOS 9.0.2 change log lists some fixes, chances are it could fix problems not listed on the change log, in other words,  this  new iOS 9.0.2 update solves some issue that wasn’t even listed.

Though the bug fixes alone make iOS 9.0.2  worth a look, there are iOS 9.0.2 problems swirling around. Therefore if you aren’t seeing any bugs or problems on whatever version of iOS you’re on right now, take your time. With an iOS 9.1 release expected to take place sometime in the next few weeks, you can take a raincheck on the iOS 9.0.2 update if you don’t think it’s worth the risk.

One thing you should always keep in mind is to create backup for your iPhone, iPad or iPod Touch before you click to install the iOS 9.0.2 update, no matter by syncing to iTunes, iCloud or exporting all the data you need to your computer through iFonebox.

iOS 9.0.1 Has Been Released To Fix Multiple Bugs