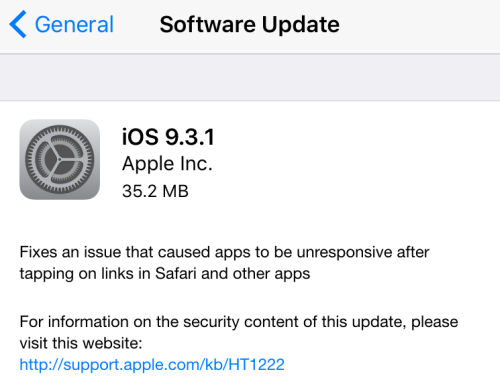 Apple today released iOS 9.3.1 to fix a bug that could cause tapping links to stop working in Safari and other apps. The problems were caused by certain apps with poor implementations of the “Universal Links” feature introduced in iOS 9, as we detailed earlier this week.

If you’re using an older iDevice and hadn’t already updated to iOS 9.3, version 9.3.1 should also include a fix for an issue where certain devices couldn’t be activated and used if the user had forgotten his or her iCloud password. Apple released a new build of iOS 9.3 earlier this week to fix the problem, though it didn’t bump up the version number of the operating system.

The update contains no other major changes. It’s available for all devices that support iOS 9, including the iPhone 4S and newer; iPad 2 and newer; all iPad Minis and iPad Pros; and the fifth- and sixth-generation iPod Touches.

According to Forbes contributor Amit Chowdry, if you aren’t affected by the links bug I’d advise holding off to be sure iOS 9.3.1 has no nasty surprises given its fast turn around time.