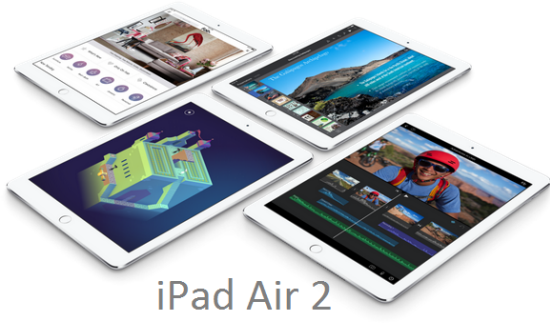 After months of rumors and speculation, Apple announced the next-generation iPad Air, dubbed the iPad Air 2, with a number of new features and improvements. it is slimmer, lighter and faster than its predecessor and of course, it now has Touch ID and comes in gold

The iPad Air 2 comes with an even thinner design, measuring 6.1mm, which is 18 percent thinner than the iPad Air. Apple says it is the world’s thinnest tablet The device is also lighter, at 0.96 pound (437 g) compared to the iPad Air’s 1 pound (469 g) weight.

Touch ID, earlier exclusive to the iPhone 5s, iPhone 6 and iPhone 6 Plus, finally comes to the iPad. Just like iPhone, you can now unlock your iPad and authorise iTunes purchases using your fingerprint, rather than entering passcodes or passwords. With iOS 8, developers can also add Touch ID support to their apps, letting you authorise yourself with a fingerprint rather than password.

Apple has added Apple pay support in the iPad Air 2, but the catch is that it only works for online purchases, and not at physical stores like the iPhone 6.

Read also: Save space on your  iPad: Top 10 tip

The iPad Air 2 features a better 8 megapixel camera that supports Burst Mode. 1.12 micron pixels, f/2.4 aperture and 1080p HD video. With burst mode, users can hold down the shutter button to quickly take multiple shots of a scene within a very small period of time. The new camera also supports Slo-mo, earlier found on the iPhone, that lets you shoot videos at a high frame rate, and play them back in slow motion.

The iPad Air 2 comes with a faster A8X chip with a 64-bit architecture, 3 billion transistors. These improvements result in a 40% faster CPU and 2.5x faster GPU. While Apple hasn’t confirmed the RAM, past rumors have suggested that the chip comes with 2GB of RAM.

The A8X chip also comes with an M8 motion coprocessor, that comes with a new barometer to measure height differences.

The iPad Air 2 ships with iOS 8.1, which comes with Apple Pay support, iCloud Photo Library beta, Messages Continuity and a bunch of other improvements.

In addition to the two color options Space Grey and Silver, there’s a gold option as well, just like the iPhone 6 lineup. 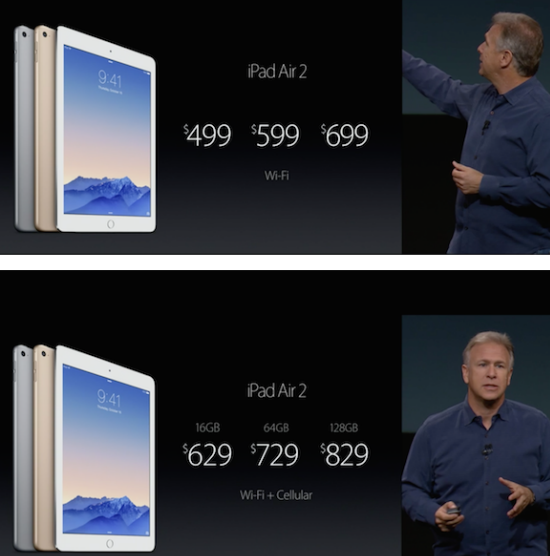