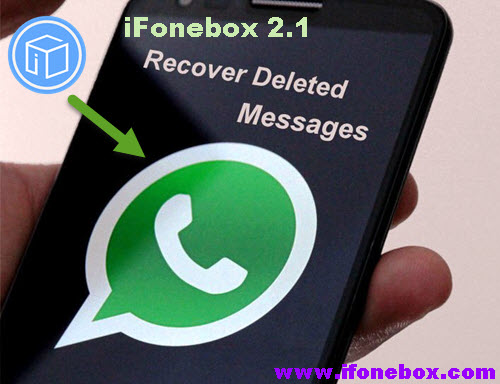 iFonebox is a powerful and professional iOS data recovery software, which is supportive to recover deleted data like contacts, messages, Whatsapp messages, notes and more from your iPhone/iPad/iPod Touch directly. Plus, it is capable of extracting and restoring data like photos, videos, Whatsapp attachments from your iTunes or iCloud backup. Pretty convenient and functional. Of course, iFonebox is able to recover contacts and notes to your iOS devices directly. Great job!

Notes: iFonebox can recover deleted text messages from Whatsapp directly, but the attachments like audio messages and images cannot be recovered directly. If you want to recover those attachments, you should have an iTunes or iCloud backup for them and then, iFonebox can extract those Whatsapp attachments from backup files.

How to use iFonebox to recover Whatsapp deleted messages?

The first thing you need to do is to download and install iFonebox 2.1. Two versions are accessible: Windows version and Mac version. Of course, you can use the free trial version in advance. Next, you can follow the 1-2-3 simple steps:

With the new released iFonebox 2.1, to recover deleted Whatsapp text messages is just as easy as a piece of cake.