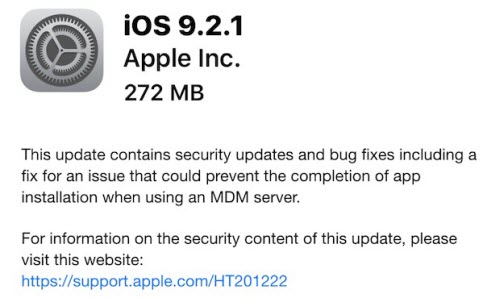 A couple of days ago, Apple released iOS 9.2.1. The update seemed to just be a bug fix and did not really introduce anything new. Now for those of you still using older iPhones, you might loathe the idea of updating because from what we have seen, updating just seems to make your phone even slower.

In fact there was a recent lawsuit in which Apple was accused of crippling the iPhone 4S with iOS 9. That being said, it seems that if anything, it has been found that iOS 9.2.1 has actually given the iPhone 4S a bit of a speed boost, at least according to a recent video put out by iAppleBytes.

To our surprise, when compared to iOS 8.4.1 running on the iPhone 4S, it was found that iOS 9.2.1 actually holds its own pretty well. Granted the boot time for the phone was noticeably longer than iOS 8.4.1, but in terms of launching apps and using them, the experience appeared to be the same and was equally fast in some cases, and was found to be a smidgen faster too with some apps.

Of course this is nowhere as fast as Apple’s newer iPhones, but considering that this is a phone that is four generations behind, what did you expect? In any case if you have some time to spare and want to check out the improvements made with iOS 9.2.1, check out the video above for the details. In the meantime we hope that Apple is able to maintain this consistency even with the release of iOS 9.3.

All text messages have disappeared with iOS 9.2.1 update, how to recover?