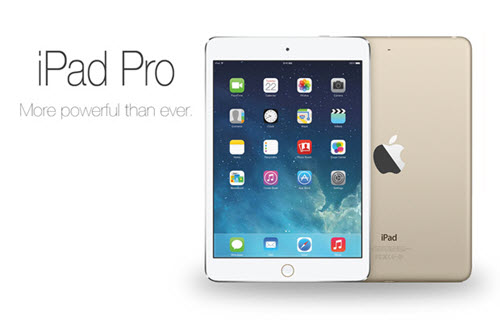 It is said that Apple has worked on iOS 9.1 and this time, iPad Pro will ship with iOS 9.1.  analytics company AppSee found an “iPad6,8” with a resolution of 2,732 x 2,048 in its logs. And MacRumors has asked AppSee to check what version of iOS the iPad had installed on it, and as it turns out, it’s running iOS 9.1, suggesting Apple’s work on iOS 9.1 coincides with the development of the iPad Pro.

Rumors this morning have also suggested the iPad Pro will be entering mass production in September or October, pointing towards a late October or November launch date. It’s possible Apple plans to stick to the same October iPad unveiling timeline it’s used for the past several years, introducing the iPad Pro in mid-October and shipping it at the end of the month.

It is not clear what will be introduced in iOS 9.1, but the iPad Pro includes several features that could require a dedicated update, such as a pressure sensitive Force Touch display, a stylus, and a USB-C port that could support peripheral devices.

Are you expected for the iPad Pro? Next is a video showing the knowing features of upcoming iPad Pro.