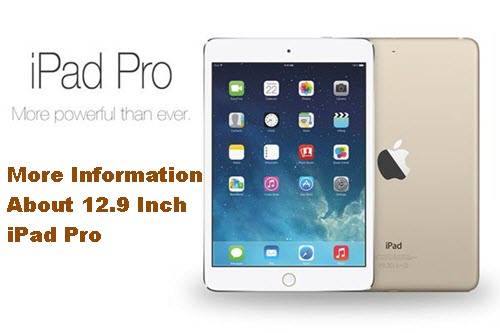 It is said that Apple will release a new iPad Pro which features 12.9 inch. Now it seems that the iPad Pro will be released, for more rumors and information have been leaked. Here’s what we’ve collected for the new iPad Pro. Scroll down to watch the video about the big iPad.

Apple is expected to include an NFC radio within the new 12.9-inch iPad. While tap-to-pay functionality in an iPad is unlikely, the inclusion of NFC could allow for an “iPad Pro” to serve as a payment receiving terminal for Apple Pay. The inclusion of NFC could also allow for simplified pairing with accessories, such as the new stylus said to be in the works, according to AppleInsider.

Plus, the big size iPad Pro will sport a new touchscreen with improved touch latency. It was said that this will improve the experience when used with a new Apple-built Bluetooth stylus. The screen itself will also reportedly sense pressure from fingertips, as Apple is said to be planning to bring its Force Touch input to the 12.9-inch iPad.

The source also said that Apple’s new, larger iPad will also feature a USB-C input, though they didn’t indicate whether it would be a new, second port option, or if USB-C would replace the Lightning connector found on current iPads.

Here’s a video about the big iPad Pro: