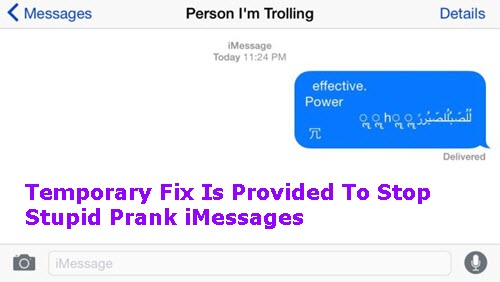 Earlier this week, a newly found bug surrounding iOS and Messages has emerged that causes the app to continuously crash when a certain text is received. At the time, Apple said it was aware of the bug and working to push an update to fix it. In the meantime however, the company tonight has published an official support document with a few suggestions on how to temporarily work around the issue.

Apple is aware of an iMessage issue caused by a specific series of unicode characters and we will make a fix available in a software update. Until the update is available, you can use these steps to re-open the Messages app.

2. Use Siri to reply to the malicious message. After you reply, you’ll be able to open Messages again

3. In Messages, swipe left to delete the entire thread. Or tap and hold the malicious message, tap More, and delete the message from the thread.

In addition to offering workarounds for the issue, the support document also notes that Apple is aware of the issue and is working to make a software update available, similar to the statement the company provided us earlier this week. “Apple is aware of an iMessage issue caused by a specific series of unicode characters and we will make a fix available in a software update,” the company wrote on the support page.