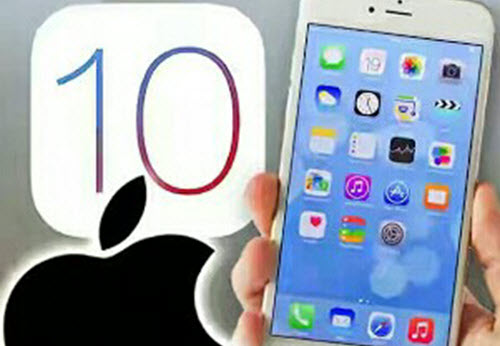 It is rumored that Apple will release its new iOS 10 system officially to the public on September 7. Apple hasn’t sent out media invites yet but multiple rumors point to an iPhone event on September 7th. Thus, iOS 10 is likely to be released on that day.

Usually, when it comes iOS update, more and more problems happen in the process of iOS update, like data loss problem, white apple stuck problem, etc. So how to update to iOS 10 successfully and safely? Here, we have several tips.

Firstly, you need to learn that if your iOS device is compatible with iOS 10. iOS 10 will be released as a free upgrade for the following devices:

What need to be done before update to iOS 10?

In order to achieve a smooth and successful iOS 10 update, here we roundup some tips you need to pay attention.

1. Make sure your iPhone iPad have enough storage space for the iOS 10 upgrade and have sufficient battery left.

2. In case the iOS 10 download and update process occur interruptions or problems, we strongly advise you to backup all your useful and important iPhone iPad data before downloading and upgrading to iOS 10, just in case of data loss problem or accidents happening.

3. For jailbroken iPhone, it will become non-jailbroken after upgrade to iOS 10, and please be aware that updating your jailbroken iPhone iPad to new iOS 10 may lose some original apps or data, so it’s also necessary to backup all important data before the update.

When the new iOS 10 is officially launched, Apple will push out the update to your compatible iPhone or iPad automatically.There are two methods to update to iOS 10: one is from iTunes, the other one is from your iPhone directly.

The easiest way is to update to iOS 10 from your iPhone. Go to Settings > General > Software Update> Download Now. After downloaded, it will remind you to install it. Then just follow the it asks.

The other way is to update to iOS 10 via iTunes. Just connect your iPhone to iTunes and it will ask you to update to new iOS. Just follow it. Also convenient and simple.